Rich Strolis started as a guide on the ever popular Farmington and Housatonic Rivers in Connecticut. He later transitioned his work to commercial tying, speaking engagements and teaching many facets of both fly fishing and fly tying across the Northeast and Eastern seaboard.

His fly patterns although based out of the Northeast, have a strong following and relevancy across the globe and have been tied and fished by many as a result of his library of online videos. 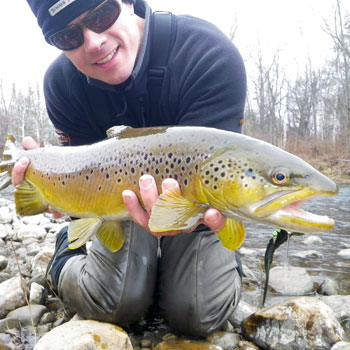 
Rich Strolis a professional guide who's spent many years on the Farmington and Housatonic rivers shares his secrets about fly fishing with streamers. Rich had developed streamer tactics that many consider unconventional but they work! Listen in to hear him talk about what he's learned.

He is a signature fly designer for the Montana Fly Company, which currently produces twenty two of his patterns. His patterns have appeared in several national magazines and books, including Flyfisherman, Eastern Fly Fishing, Strip Set, Fusion Tying, Caddisflies and 50 Best Places, Fly Fishing The Northeast, and many more.

Rich is a very well rounded trout fisherman, but his passion lies in chasing trophy trout and various other apex predators on streamers. He lives in Simsbury, Connecticut, with his wife, Megan, and two daughters, Tessa and Nora.

His highly anticipated first book, Catching Shadows: Tying Flies For The Toughest Fish and Strategies for Fishing Them from Stackpole Books was published in January 2016. Rich plans on getting back out there guiding full time in the not so distant future.