Paul Marriner was born in Halifax in 1944, Paul went to Dalhousie and Nova Scotia Tech, and graduated in Mechanical Engineering. He taught at the Royal Military College in Kingston where he also received a Masters Degree. Paul now owns and operates Gale's End Press. 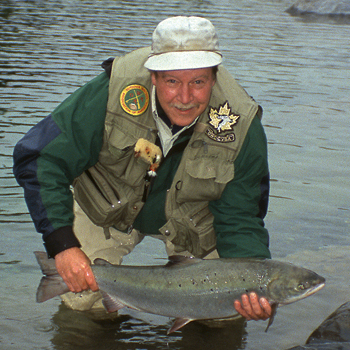 Paul's articles have appeared in magazines on five continents, and number in the hundreds.

His latest work, A Compendium of Canadian Fly Patterns (co-author), was released June 1, 2006. How to Choose & Use Fly-tying Thread, was published in July of 2004, and Stillwater Fly Fishing: Tools & Tactics, in late 2003. Paul also authored Atlantic Salmon - A Fly Fishing Primer (an Outdoor Writers award winning book in 1994), The Ausable River Journal, The Miramichi River Journal, and Modern Atlantic Salmon Flies (an Outdoor Writers award winning book in 2000). He has also contributed to several anthologies. In 1991 Paul won the Gregory Clark Award for outstanding contributions to the arts of fly fishing.

Now living in Mahone Bay, NS, Paul has been a fly fisherman for more than forty years and has angled for Atlantic and Pacific salmon, trout, bass, and other fresh and salt water species in fourteen countries around the world. He is an eight time member of the Canadian team participating in the World and Commonwealth Fly Fishing Championships and was the Captain of the Canadian team from 1994 to 1996 and again in 2000. Paul has also made numerous appearances as a lecturer on fly fishing and fly tying.

For more information on Paul, his books and publishing company visit his website Gale's End Press.

How to Choose & Use Fly-tying Thread