Michael Mullaney is a professional fly fishing guide on Cape Cod. He started his fly fishing career on the Delaware river in Pennsylvania at the helm of a Hyde drift boat. Working at New Hope Outfitters in Bucks County from 1996 to 2001 he learned to tie caddis flies and handle the 5 and 6 weight fly rods. Aiming for smallmouth bass on the river he mastered his ability with wet and dry fly presentations on smallmouths. Most of us start with the bass, perch and crappie fly fishing. For Michael on the Delaware river he took this one step further and landed pickeral, catfish, trout, muskie, creeb chub, snakes, carp, largemouth, shad, herring, stripers, mudfish, sunfish, and once a beaver all on the fly rod. 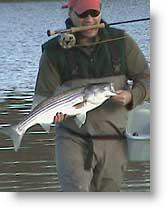 
Stripping for Stripers
The East coast comes alive when the strippers come in - making the water boil with activity. Michael Mullaney, a professional guide in Cape Cod shares his secrets on catching one of the most popular sportfish on the Eastern seaboard.

In 2002, Michael moved to the mountain streams of Western Massachusetts. He worked at Greenfield outfitters for 2 years taking people fishing on the Green, Miller's, Deerfield, Sawmill, and Connecticut rivers. On these rivers Michael honed his skill on native brook trout, ranibow, and brown trout action as well as Atlantic salmon.

In 2003, Michael moved to Cape Cod and formed the "Brown Dog Fishing Guides" a professional guide service. Michael also created a publishing company called the "Cape Cod Martime Guide" which focuses on Maritime activities including fly fishing. Michael has guided for several TV shows including Orvis/ESPN in 2002, OLN/Versus/Cabelas in 2005, and for Greenfield community television in 2003.

As the season moves into June squid and sand eels become the perfect choice to fish for striped bass, bluefish, Cod, sea trout, fluke and flounder. As we move towards July all sorts of baitfish patterns can be used many people refferring to this style of bait as anchovies or small peanut bunker. All summer long stipers can also be seen tail up out of water 2 or 3 feet deep routing on the bottom for crabs.

As July becomes August the pelagic species of fish such as tuna, migrating shark species, bonito, and atlantic sailfish and all the game species are in play.

Cape Cod is a pennisula of land extended from the coast of Massachusetts. The two Islands just south of the Cape Nantucket and Martha's Vineyard interact with Cape Cod and the entire region is rich in maritime history and of course world class fishing.

The clean waters of areas such as Chatham, Mass are fed by the open Atlantic and home to fantastic clamming. Oyster beds, clams beds, gravel bottoms, and plenty of flats style fishing make for the perfect opportunity to fly fish. Sight fishing for stripers and all species is not uncommon and throughout the season watching and looking out for diving birds up and down Cape Cod's beaches is the way to find the fish.

As the summer turns to fall the false albacore arrive and the bluefish also become very active. Some of the stripers head up to Maine, but many remain her all season. Fall fishing is intense as the migration of stripers come back down, the pelagic are still here, the baitfish are here and the entire concert explodes into the fall blitz. The long running Martha's Vineyard Derby starts at the end of September and runs thru the first couple of weeks of October in a culmination of fishing events. The largest stripers of the year are landed in the fall.

Michael is a polished fly casting instructor and also a fly tyer with experience in choosing color and size flies specific for Cape Cod. Potential fly fishers and experienced fly fishers will enjoy talking with Michael about Cape Cod. Casting from a flat's boat, on the kayak, in the estuary, or on the beach.

For more information on Michael's' guide service visit his web site at www.CapeCodFlyFishing.com.