Jonathan Olch is the author of the comprehensive and highly acclaimed new book A Passion For Permit. You can learn about the book on Jon's website: JonOlch.com or at Wild River Press. Over a thirty-year period Jonathan has hooked or caught hundreds of Atlantic permit, along with several other prized Trachinotus species, in such oases as Belize, Florida, Cuba, the Bahamas, Mexico, Honduras, Seychelles, Australia, Oman, Turks & Caicos and Venezuela. Olch is the holder of the current IGFA 20-pound tippet class world-record Atlantic permit, a fish caught and released on the flats of Key West. 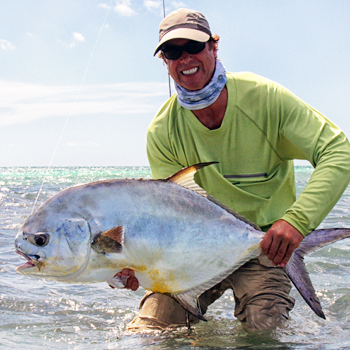 
Lani Waller has pursued steelhead for over four decades and is considered one of the foremost experts on trophy British Columbia steelhead. Learn Lani's best techniques for catching steelhead on the fly.


A Passion for Permit


Jon Olch has been fascinated with fishing the saltwater flats for almost 40 years. He’s caught just about every kind of fish on the flats but he’s obsessed with permit. He’s studied the permit inside and out and is one of the most knowledgeable permit fly fishers on the planet. Join us to learn more about fly fishing for one of the most challenging fish in the water.

Years ago, Olch was a guest lecturer on saltwater flats fishing at the FFF Annual Conclave and ISE Sportsman's Expositions and also appeared as a guest angler on ESPN’s “The Fishin’ Hole.”

Jonathan grew up in New England where he learned to ski and explore the trout streams of New Hampshire. Moving west, he competed briefly as a ski racer for the University of Colorado and later on western regional professional tours. Physical issues plagued him, so he turned his need for speed to auto racing, where he raced professionally for seven years in multiple IMSA-sanctioned sports car series, highlighted, perhaps, by a top finish at the 24 Hours of Daytona. Around that time, Jonathan immersed himself in the real estate brokerage and development business around Park City, Utah, allowing him to pursue his passion for saltwater flats fishing with a vengeance.

For vast chunks of the past decade, Jonathan has obsessively chased permit with a fly rod and camera while based aboard his personal catamaran, primarily in Belize, Honduras and Florida. Now, in his latest quest, he has redirected his catamaran to explore for permit in obscure and remote parts of the Caribbean.

When not hunting the flats, Olch enjoys flying his Cessna 206 around the western states dropping in on obscure trout and steelhead haunts. Jonathan makes his home in the mountains outside of Park City, Utah.