Jason Booth, co-owner of Gunnison River Guides, has been a professional fly fishing guide for 23 years on the Gunnison and Taylor Rivers. Jason Booth grew up on a trout stream in northern Michigan and had an extreme passion for fishing the Great Lakes and their tributaries, especially for Coaster Browns and Steelhead.

On the Gunnison River Jason has taken over 3000 floats on commercial fly trips; that’s about 6000 people he’s taken fly fishing. 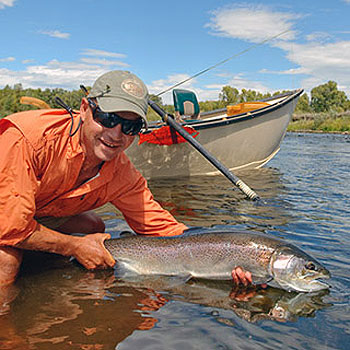 
Jason Booth has guided over 6,000 fly fishers down the Gunnison River over the past 23 years so he knows this river like the back of his hand, maybe better. Join us to learn about the secrets of the Gunnison River in Colorado - where to go and how to fish it.

Jason Booth has been featured in Southwest Fly FishingFly Fisherman magazine’s cover article and centerfold “Falling in Love with the Gunnison,” in January 2015, another Stemple production of text and photos.

Jason’s extensive time on the water made him a true expert on the Gunnison River. He loves fly fishing and teaching people how to do it. Jason sees all the hatches and the river and knows which flies work best for them.

Jason Booth is a fishy guy. And, when you look at the recipe that makes the man, you’re going to have that…Take one part Chockoloskee, 1 part Polish perseverance, 1 part “up north” Michigan, 1 part Rocky Mountain local and you’ve got a recipe for a fellow so fishy, one friend observes, “Booth could catch a fish in a mud puddle.”