Henry has been pursuing striped bass for over 30 years in both salt water and fresh water. He is currently guiding in fresh water on Lake Sidney Lanier (north of Atlanta) , Lake Allatoona (NW of Atlanta) and the Chattahoochee River in Atlanta. He guides for landlocked stripers, hybrids, spotted bass and carp. He fishes both fresh & salt water game fish approximately 200 days a year.

Henry is an accomplished fly designer as his trademarked fly patterns are sold nationally through Umpqua Feather Merchants. 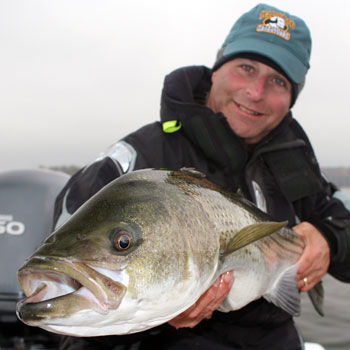 
Henry Cowen has been pursuing striped bass for over 30 years in both salt water and fresh water. Join us to find out how Henry finds, hooks and lands these freshwater giants.

As an Umpqua royalty fly designer his patterns appear and are available in the Orvis catalogue as well as Cabela’s, LL Bean, Bass Pro Shops and all fly shops across the United States that carry Umpqua flies.

Henry has appeared as a guest on a number of nationally televised outdoor shows (The Outfitters, The Orvis Sporting life, The Reel Guys, One More Cast w/Shaw Grigsby, The Nuts & Bolts of Fishing, Travis Johnson Outdoors & O’Neill Outside) as well as some regional outdoor television shows (Georgia Outdoors and Growing Up Outdoors). He was featured as the fishing personality on the video entitled “Fly Fishing for Landlocked Stripers”. Henry is currently on pro staff with Towee Boats and is a guide ambassador with Simms. He is on guide programs for Ranger Boats, Johnson Outdoors (Minnkota trolling motors & Humminbird Electronics), Sage, TFO, Tibor, Renzetti, RIO Fly Lines and Orvis.

You can visit his web site at www.henrycowenflyfishing.com