Gary Bulla grew up on the beaches and waters of the Southern California coast. He found salt-water fly fishing to combine his long-time love for the ocean and his passion for fly fishing with the convenience of having big fish right at his back door. He quickly realized that there was not a great deal of information out there about catching salt-water species on the fly and began to use his knowledge of tides and tidal life to not only chase down surf perch, but corbina, halibut, and sea bass. 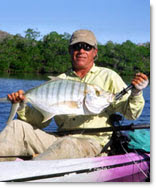 
Kayak Fly Fishing in Baja Mexico
Gary Bulla is an expert on fly fishing salt water from Point Conception to the Sea of Cortez. He has landed over 130 species on the fly. Listen in to learn Gary's strategies and techniques for fly fishing from a kayak in Baja, Mexico.

It seemed that there was a fishery right along the shores of Southern California that would provide a great recreation , with some awesome challenges for the flyfishers of the area who were having to ommit to a long weekend in the Eastern Sierras or elsewhere.

California Corbina were the biggest and most interesting challenge. They were visible in the surf line-and a difficult challenge to the flyfisher.Perfect! Over the next few years, he spent his early mornings and late evenings patrolling the beaches, trying to develop presentations and flies that could bring to hand the corbina on a more consistent basis.He began guiding others and holding seminars on surf fishing. Through his website and another the information on flyfishing the surf exploded and a new fishery was born.

He also began cruising the kelp beds in his kayak, and developing flies that would attract the many varieties of fish found on the So. Calif. Coast. Idylwild Flies named him a "Signature Tyer" and launched their saltwater line of flies using his proven patterns. The "Gremmie" surf fly was featured in California Flyfisher magazine. Another fly that has become a standard big game fly in Baja and beyond is his Tuna Tux. It was featured in Tony Lolli's book Go-to Flies.

During this time, he began accompanying his wife, Theresa, a teacher of marine biology, on trips with her eighth grade school children to Baja’s Magdelena Bay to view the gray whales and their young. He brought a fly rod and he became astounded at the incredible variety of fish that were available in the waters of Baja. This began a second quest and more years of experimentation that have led to his being one of the most active fly fishing guides for Baja waters and one of the more knowledgeable salt-water fly-fishers from Point Conception to the Sea of Cortez.

He has landed over 130 species of fish in the salt on the fly. He guides kayaking fly fishing trips to Espiritu Santo Island and San Jose Island several times a year, in addition to leading blue water trips at Cerralvo Island (in the Sea of Cortez) and Belize. Back at home he teaches and guides fly fishing in the surf in southern California waters.