Although he has been fishing for as long as he can remember, Frank Wood didn’t pick up his first fly rod until he was 16. The year was 1978, and he took to the sport after watching a fly-fisherman plying his trade on the Dunk River in Prince Edward Island.

Not knowing anything about the sport, he went out, bought some gear – and started fly-fishing. Initially, he did quite well fishing for Brook Trout in the small creeks near his home, but faced some technical challenges when he moved to Alberta in 1979. 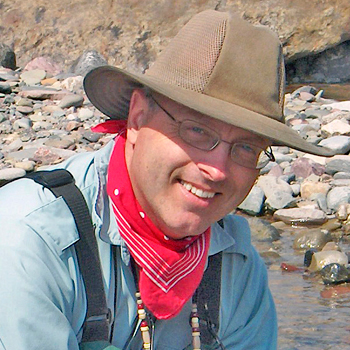 
Lake Trout on the Fly
Frank Wood has been on a personal quest to catch and land a lake trout on the fly that weighs over 15 lbs. Well he’s far exceed his goal and has brought in fish at 22 lbs on conventional fly tackle. Learn how he gets hooked up with these monsters on this show.

He now had to face an incredible assortment of fishing opportunities ranging from pothole lakes to Freestone waters, to Spring Creeks, to Tailwater fisheries. All of these new waters required some level of casting prowess, and in that regard, he was quite frustrated.

Joining the Edmonton Trout Fishing Club was the turning point to his flyfishing career. There he managed to infiltrate a small group of anglers collectively known as the ‘Predators’. Most influential of these, was a man named Robert Cormier who ended up becoming his good friend and mentor until his premature death in 2003.

The next major milestone for Frank was in 1994 when he started Streamside Adventures, the first guided fly-fishing company based out of Edmonton. 1995 saw him develop a fly-fishing program for Edmonton Public Schools, and in 1997 he started working with the Alberta Tourism Education Council on a Freshwater Fishing Guide Certification program. His work on the latter paid off in 1998 when he became the first Nationally Certified guide in Alberta.

1998 was also the year that Frank started to dabble in outdoor writing. Initially, his stories were published in the Edmonton Sun’s Outdoor section, but soon after, he branched into magazines and contributing stories for books.

In the summer of 2000, Frank moved his family from Edmonton to Calgary. Within a week of moving, he took his two daughters on their first fishing trip. Although they didn’t catch anything, it planted the seed that has developed over the years into the same love for the outdoors that he has. 2005 saw Frank became a full-fledged member of the Outdoor Writers of Canada. Not only was he writing, but he also had taken up the hobby of photography in support of his stories. Frank also started to teach fly-fishing courses again, only this time with Calgary Parks and Recreation. Free time started to become somewhat strained, so he made the difficult decision to discontinue guiding.

And currently he is working on three books, several magazine stories, a couple of photo essays – all the while trying to figure out this ePublishing thing. Somewhere in there, he still takes time for his family – and if he’s really good – he still gets to go fly-fishing!