Capt. Earl Waters, a life long resident of Florida, learned to handle and cast a fly rod from a next door neighbor, Clarence Fennell. Clarence, an avid Bass fisherman introduced fly fishing to Earl as a means of catching Black Bass in the nearby lakes and rivers of North Florida. Earl recalls reading every hunting and fishing magazine that was published in his youth. Earl states that it was the intriguing articles written by outdoor writer, Charlie Waterman that inspired him to seek the pleasures of the outdoors and the enjoyment of fishing. 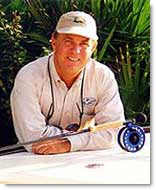 
Giant Homosassa Tarpon
Capt. Earl Waters, a Florida native, has been chasing and catching the giant Homosassa tarpon for over 25 years. Learn his secrets on hooking up and landing these incredible trophies.

How to Get a Grand Slam in the Salt
Earl Waters has achieved over 300 grand slams in the salt for his clients and himself so he knows his stuff. Find out from Earl how to land a tarpon, permit and bonefish all in one day. 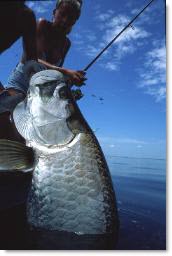 Hoping to experience just a few of the same adventures, led Earl to the Okefenokee swamp and the Florida Everglades. Earl's passion for Saltwater fishing became a reality when his father took a job selling farm equipment to grove owners in Ft. Pierce, one summer. Earl worked on charter boats in the day and snook fished at night.

Upon entering college Earl took every break possible to head to the Everglades for Snook and Tarpon fishing. Also, while in college Earl entered a higher form of excitement, racing Motocross. Fishing won out over motorcycles when he got a taste of Fishing for Giant Tarpon at Homosassa. Mentor Capt. John Emery encouraged Earl to become a saltwater fishing guide.

In 1977 Earl Waters met a Fly rod world record holder, Dave Chermanski. Earl credits Dave for being the one whom first taught him to double haul. Once mastering the double haul and boating many of those Homosassa giant tarpon Earl started soliciting Flyfishing customers to fish the Homosassa tarpon migration.

Earl has become what some would call a tarpon addict. Leading his customers to hundreds of Tarpon in the 150 Ib. range. At least a half-dozen of which have been lost were considered to be 200 Ib. fish.

Over the years Earl has had the opportunity to guide a few fishing celebrities; Steve Rajeff, Al Pflueger Jr., Stu Apte, Lee and Joan Wulff, Mark Sosin, and Joe Robinson, and Roland Martin. All of which are record holders for casting or record fish.

Earl moved to Homosassa to seek a career as a full time professional guide in 1985 when close friend and mentor, Capt. John Emory encouraged Earl to search out the flats of Florida's Suncoast Keys, something no one else had ever done in a flats' skiff. Nearly every day during the following years, Earl poled the vast open flats and maze of Islands that were abound with opportunities to apply Fla. Keys style sight fishing. The area was found to be abundant with tailing Reds, cruising Cobia, and top water bait crashing Jack Crevalle; all in crystal clear water.

Earl has set the standards and pioneered the way for catching many species of fish that roam the skinny waters of Homosassa.

Earl's strong convictions for the preservation of the environment has led him to be a strong supporter and board member of several conservation associations.

His attentiveness to detail and meticulous ways has also led Earl to his involvement in the tackle industry, consulting for many of the leading tackle manufacturers. Earl has invented several items for the tackle and boating industry.

Taking advantage of the opportunities to photograph many of his fishing and travel trips has allowed Earl to share his photography talents with others through leading fishing magazines and outdoor publications.

Earl, preferring to fish and guide his customers in a more tranquil atmosphere, has entered the
tournament arena from time to time. Working as a team, Earl has managed to keep his anglers in the winning circle many times over. Some of which include, "The SLAM", with celebrity angler Al Pflueger; and High Point Guide, two years running in the Tarpon Wear Tournament in Marathon Florida. Also receiving top honors in the IFA Open in Tampa and Homosassa. Top honors in the 2005 CCA East Coast Tournament, held in Ft. Pierce Florida.

Earl Waters resides in the small town of Homosassa, Florida, but is equally at home most anywhere in Florida's remote waters. Earl has spent the last several decades following the fish he likes best; Tarpon, Cobia, Snook, Bonefish, Permit, and Redfish.

This Angling thirst of more and bigger fish has led Earl in recent years to the Caribbean, South America, Venezuela, and Mexico. Leading and organizing other anglers to adventurous fishing paradise has also become part of his routine fishing duties.

Today you may see Capt. Earl Waters fishing the Florida Keys, the Caribbean, South America or right in his own back yard; pursuing giant Tarpon.