Dick Cameron grew up in southeast Alaska doing the normal things that kids did in the 60's and 70's. He learned about commercial fishing, hunting and sport fishing but with subsistence motivations. He learned to fly fish in 1990, rather late in life, and instantly found it to be the most rewarding form of fishing he had experienced to that point. 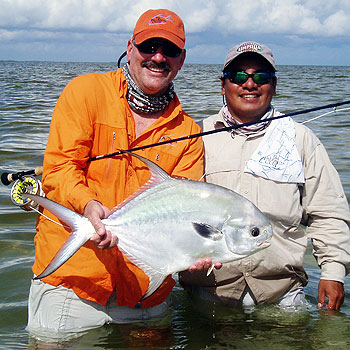 
Permit on the Fly in Yucatan's Ascension Bay
Dick Cameron has experienced over 800 permit landed and countless hundreds more hooked or near hooked either personally or through the accounts of his friends, clients and guides. To understand permit you need to be in the thick of them and Dick certainly is. Listen in to hear Dicks tips, tricks and secrets to getting hooked up with a permit.

It didn't take Dick long to catch the travel bug and in June of 1992 he took a trip with a few friends to the west side of the Everglades in the 10,000 Islands area. Everything about it was exciting to him especially the sight fishing which gave the whole experience a hunting sort of feel. In the spring of 1993 he booked 8 days in the Florida Keys during the tarpon migration. He fished 6 days with Capt. Rob Fordyce and was completely vexed by the silver king. His fly fishing life was forever changed from this point on. He collected gear, attended trade shows, worked on his casting and constantly planned the next trip.

In the winter of 1994 Dick Cameron left the family plumbing and heating business and went full time into the sport fish for hire industry in southeast Alaska. His primary focus was conventional light tackle fishing for salmon, halibut and lingcod but they offered a fly out fly fishing day trip as well. This left the winter with plenty of time to head to the tropics. Florida was the destination he most often visited but he also made trips into Guatemala, Costa Rica and Panama.

After a brief tenure in the Alaska lodge business he returned to the plumbing and heating to re-group and figure out what he should do next. That answer came in the fall of 2000 when he was offered the job of managing a prestigious flats fishing lodge in Punta Allen Mexico, The Palometa Club, which he took of course. That was eight years ago and the chapter is still being written.

Either personally or through the accounts of his friends, clients and guides Dick experienced over 800 permit landed and countless hundreds more hooked or near hooked.

For more information on Dick and his guide service visit his web site at www.PalometaClub.com.