Daniel Galhardo is the founder of Tenkara USA and is the first person to introduce tenkara outside of Japan. Tenkara is the Japanese method of fly-fishing that uses only a rod, line and fly, but no reel. 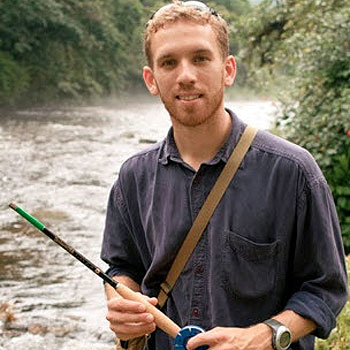 
Daniel Galhardo founded Tenkara USA in 2009 and has brought the traditional Japanese method of fly-fishing where only a rod, line and fly are used to the US. Tenkara is about fly-fishing simplicity and mountain-stream effectiveness. Eleven to fourteen foot long rods allow anglers to fish mountain streams in a way that is nearly impossible with western fly gear. Listen to learn about the history, philosophy and of course the strategies and techniques of using the Tenkara system.


Daniel Galhardo brought Tenkara fly fishing to North America and has introduced a new an exciting way to fly fish. Learn about the history and fishing in Japan that inspired him to create a company based on Tenkara. Daniel will also share how he started and built his business into the success it is today.

Born and raised in Brazil, where he taught himself fly-fishing at age 14, Daniel moved to California as an exchange student and stayed for the trout fishing, and then for his wife. Daniel found he was most at home in mountain streams. And so, when he discovered tenkara, he knew it was the perfect fit for him and that the world should learn about it.

In 2009 he founded Tenkara USA (www.tenkarausa.com) to introduce the method in the US and beyond and remind people that fundamentally "fly fishing is simple, and this is how simple it can be".

Tenkara is ideal for fly-fishing for trout in mountain streams, though it is also being adapted by anglers in the US for different waters and different fish. Tenkara originated in the hands of commercial anglers in the mountain streams of Japan, and those anglers had to develop very effective techniques that relied on little in the way of tackle. As a tool, anglers can use tenkara with dry flies, nymphs or wet flies or in any way they want. As a method, tenkara places more emphasis on technique and using only the necessary equipment, for example, tenkara anglers in Japan often rely only on one fly pattern no matter where they are fishing. And, in case you're wondering, Daniel only uses one fly pattern, anywhere he fishes for trout. Daniel's passion lies in learning, perfecting and sharing the complete method and techniques, but he also likes to think that everyone has to go in search of their own tenkara.