Jeff Currier loves adventure fly fishing and is back at it again chasing tigerfish in Tanzania. Listen in to learn about fishing for this exotic species. 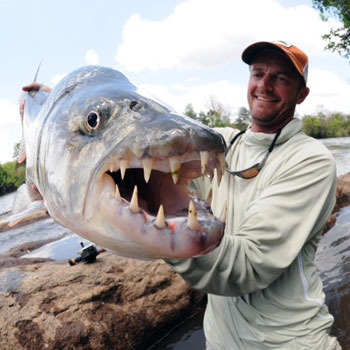 Listen to other shows with Jeff Currier…

What could be more exciting for an angler than to go after tigerfish in the beautiful African waters of Tanzania? The promise of beauty that is so pristine coupled with the wild adventure of facing one of the most fearsome fish in the world simply cannot be matched. It’s all an angler could ever ask for and that’s what Jeff Currier recently pursued.

A few of Jeff Currier’s professions include being a teacher, author, artist, guide, industry operative, and international traveler. He has accumulated over 40 years of experience in fly fishing. He has guided fly fishers to exotic destinations around the globe and has taken over 275 kinds of fish on a fly rod in freshwater and salt in over 40 countries.

The tigerfish is a close relative of the piranhas. They have very similar teeth and they both have daggers and adipose fins, although they quite differ in the rest of their physical appearance. The tigerfish is more elongated like a trout or a salmon as opposed to the piranha which is more bluegill-shaped or bass-shaped. The two most common species are located in Southern Africa – one is the Goliath tigerfish in the Congo River and the other one is the Zambezi tigerfish or the Tanzania tigerfish which was documented for the first time in 2008.

Tanzania is located on the east side of Africa. It is one of the countries that border the Indian Ocean. It is directly south of Kenya and directly north of Mozambique which are also both on the east coast of Africa. This place was chosen by Jeff, Chris Patterson, and Jim Klug for a film project called Drift and Rise because of its exotic feel. They fished the Mnyera and Ruhudji River in the western border of Tanzania, which are only a little wider and a bit deeper than the Missouri River in Montana.

The tigerfish’s main food source is a fish called red barb. They are around 6 to 8 inches long and are very abundant. Tigers may also eat anything they want – even big stuff.

In fishing tigerfish, 2/0 and 3/0 flies are best to use. The most important thing is that the hook is sharp. Their mouths have so many teeth they almost get in the way of where the hook may be able to catch in the mouth; the few spots that don’t have teeth in the way are very hard. Flies that work best for tigerfish are the Enrico Puglisi flies. They are synthetic minnow-looking with big eyes. Size 2/0 Clouser Minnows also work. Synthetic flies stay together a little better, whereas if you had buck tail, the tigers just shave it in half and it doesn’t last too long because of their teeth.

One of the major mistakes people make is that they try to take a short cut on fly lines since fly lines cost as much as 70 dollars per piece. Some take a line built for cold weather, which cause a lot of trouble instead of the preferred tropic lines. The cold weather fly lines will sag. The cast will be so soft preventing the fly from getting out there. They will also twist up very badly. Jeff and his team used 250, 300, and 350 grains of the Rio Deep Sea lines when they fished tigerfish in Tanzania.

On leaders, a 20-pound is the best to use if you are meaning to fight fish in your backing most of the time. Using a tippet and a leader that is too heavy could cause you to break your backing as well as lose your fly line. And tigerfish hit incredibly hard.

For those who are thinking about fishing in Tanzania, it is an adventure that costs money and a lot of time. For Jeff, traveling took around 55 hours – flight time was about 28 hours. The trip in general cost almost $6000. One of the problems in travelling to Africa is that if the government finds out you’re doing well with your program, they make the prices go up.

On the venue itself, four people are only accepted in a week for 19 weeks, so there are very few people getting into the camp. They don’t want it over fished, which is one of the reasons for the high price. But with all these bits of hindrances, Jeff still thought that the trip was worth it.