★ ★ ★ ★ ★
Josh Mead, an Orvis Endorsed Fly Fishing Guide, has fished the famous rivers of Michigan since he was five years old. Learn about fly fishing the Pere Marquette River where huge Browns, Steelhead and Salmon make their home. 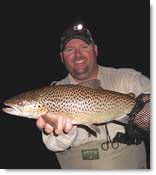 Whether your purpose is to go fly fishing or canoeing, the Pere Marquette is one of the most perfect places to go. This river has a reputation for being one of the finest fisheries for steelhead, trout, and salmon in the Great Lakes region. It is also very popular with canoeists.

Josh has been fishing in Michigan since he was just 5 years old. Josh tried his luck with fly fishing in 2005 with plugging and bottom bouncing. He began on lakes and ponds for bass and bluegill and later rounded out his fishing and entomology by working and managing the fly shop at Pere Marquette River Lodge for the past 4 years. He is an Orvis Endorsed Fly Fishing Guide since 2008. His laid back and easygoing approach makes him a great choice for beginners and kids. The Pere Marquette River is located in the central northwest part of Michigan’s Lower Peninsula. It runs through two different counties: Lake County and Mason County.

Pere Marquette is the only free flowing river in the Midwest. It is a spring-fed river that has absolutely no dams in it. It is also just a phenomenal reproduction fishery. It doesn’t have any steelhead or salmon stocking. The river has 100% natural reproduction.

The depth of the river depends on the time of the year. It ranges and fluctuates with the rainfall. The depth can range anywhere from 2 feet deep to around 16 feet deep, and another two or three feet deeper under higher normal water conditions.

Pere Marquette is a year-round fishery. Browns, rainbows, and steelhead are available in the stream all year, though steelheads are quite rare during summer. Once every 10 years, The River freezes over for two weeks around the month of February.

Pere Marquette is better suited to floating than wading for access. Foot travel is quite limited in the river, but there is a lot of foot access in certain sections of the river. Under high water conditions, the river can become tough. Once the bottom of the river cannot be seen, it becomes very dangerous for wading. Using the boat for transportation makes it possible to get more access and provides better opportunities for fishing. “You can get into areas where people haven’t been relentlessly pounding on it.”

The laws of accessibility in the state of Michigan are the same as in Montana. Anyone can go up to the highest water mark of the river. Getting out of the boat to fish in any private area is possible, as long there are private lands on both sides. By law, one can get out onto private property and go round an obstruction, but he must immediately get back into the river.

The Pere Marquette River is famous for the mayfly species, Hexagenia, better known as the hex. Their sizes range anywhere from 2 to 2.5 inches long. They are cream and yellow-colored giant flies. The best strategy on catching a hex hatch is to pick the right type of water. In most of the hexagenia water, the hatch happens below the Upper Branch Bridge down to the Indian. At the Swamp above the Indian, is a lot of murky water where the hexagenias hatch and reside. After that, they fly upstream to deposit their eggs. Anywhere from the Lower Branch to the Upper Branch is great for catching mayflies. The Lower Branch to Indian is the most popular hex water in the area. The last weeks of June going the first week of July is perfect for catching Hexagenia limbata.

The best time to catch steelhead on the fly is the last two weeks of March and the first two week in April. Most people say that Easter time is the best time to do it. Steelheads become really active when they are on water temperatures between 32 to 48 degrees. The best combination of rod, reel, and line for steelhead is a 10-foot-7 weight with a good reel with a drag on it – something that will sustain the cold water and not going to freeze up instantly or has seal drag. Josh’s top go-to flies for steelhead are the ultimate common prince nymph, the hex nymph, and the egg fly.

For salmon fishing, the peak of the season is mid-September through mid-October. The best combination of rod, reel, and line weight is less than a 9-weight. A 9-foot-9 or 10-foot-9 weight is the best combination. Since salmon are typically bigger, they are meaner and stronger, thus the need for heavier weight rods. Stoneflies are one of the favorite flies for fishing salmon. They do not really feed on nymphs so the best flies are something big and flashy, like white or silver, to get their attention.

Listen to our full interview with Josh Mead and learn more about fly fishing browns, steelhead, and salmon at the Pere Marquette River.