★ ★ ★ ★ ★
Thomas Whiting, president and owner of Whiting Farms, Inc., producer of the finest fly tying feathers for the tyers of the world will share his knowlege about those wonderful feathers we use everyday. From raising chickens to the science behind genetic breeding to selecting the proper hackle to use on your flies - Tom will cover it all in great detail. 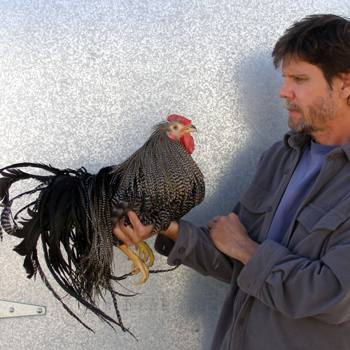 When we’re looking for hackle, we’re always looking for the best feather there is, which is probably the most expensive. But what does it take to produce these good feathers that we and our targeted trout all love?

Dr. Thomas Whiting is the president and owner of Whiting Farms, Inc., a company he founded in 1989. Whiting Farm’s mission since its inception is to become the supplier of the finest fly tying feathers for tiers in the world. Tom’s Whiting Farm started with the famed “Hoffman Hackle” which was developed by Henry Hoffman of Oregon. From there, it has grown to be the largest and most diverse source of quality tying feathers in the world. Tom has been involved with poultry and game birds since the age of 10. To pursue his interest, he gained three university degrees in poultry science in different universities namely: Colorado State University (BS), University of Georgia (MS), and University of Arkansas (PhD). His farm is located in Colorado.

Running a hackle business, according to Tom, is surprisingly complicated. You have to control things from the pedigree lines of birds, your breeding program through the whole production cycle and process the pelts, grade them, package them, market them, and distribute them out to wherever your customers are in shipping or however you get it to them. On top of all these, you would still have to take care of the regular challenges of a small business such as payroll, personnel, taxes, facilities, repair, and maintenance.

Feathers are actually reptilian scales that have been greatly elongated and specialized because birds were evolved from reptiles or dinosaurs.

Chickens used in producing feathers are different from egg or meat chickens. Aside from the feather industry being a very small business, one radical difference is that in the feather business, you really have to work on pampering the birds. Pampering them will make them realize their genetic potential to grow great feathers. Anything that you do wrong, including improper lighting or nutrition as well as being too crowded would result to growing bad feathers.

Wet fly hackles require a totally different feather. However, the laws of genetics are the same. What Tom does is he just applies those laws, have a different goal in mind, select in that direction, and start with a different foundation stock.

One confusing task is grading feathers. They grade the capes and the saddles in a slightly different way. Since there are no bad feathers, they grade the saddles mostly on quantity and then figure it out on a cost per fly.

The cape, which is the head and neck feathers, are graded by quantity and size range. The size range of the cape is one of the big things that people seek out and are willing to pay for.

When you’re looking to buy dry fly hackles, Tom recommends looking at the glossiness of the feather as well as its packaging. Feathers that don’t look glossy and clean generally will not work great. It is a good idea to take it out of the package to take a closer look.

Unlike in the 1940s and ‘50s where roosters had to molt their first nuptial plumage and produce good feathers the second time, in genetic hackles, you will only need the first set of rooster feathers. Moreover, the rooster should not be over a year older or else, you will lose your first growth of feathers.

Hackles that have been maintained in storage under good conditions will be good for years. To protect your hackles, put them away from the sunlight, don’t let bugs or moths get on them, and don’t expose them to any really excess dryness since high temperature will make them brittle. Putting them in their zip-lock bags is a good way to protect them.

Right now, Tom’s challenge is to increase the production to catch up with the demand. “We’re short especially on the dry fly capes and demand has gone up markedly and I’m going to fulfill that. I hate to not to be able to sell products that people want.”