Jim Teeny, originator of the integrated sinking fly line, is always on the cutting edge of fly line design. Learn the differences between the lines and how to use them best to catch more fish. 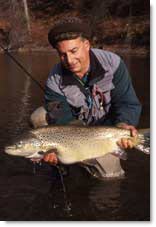 Choosing the right fly line is very important in fly fishing. The fly line is a big factor on a fisherman’s success. The fly is also an essential factor on whether or not the fish will take the fly or not. What fly line should you use on different types of water?

Jim Teeney is a fly fishing innovator. He designed the Teeny Nymph for large, cruising trout at Oregon’s East Lake when he was 16. As his success grew with his discovery of his first fly pattern, Jim began to experiment with different color variations of the fly and was able to increase success even on other species of fish. He started the Teeny Nymph Company, now Teeny, Inc. He continued working on his innovations. Jim has appeared on many television shows teaching and sharing his innovations and techniques with interested fly fishers from all across the U.S. and other countries. He has authored articles in major fishing publications and been featured in articles by other authors as well. Jim's new book, Fly Fishing Great Waters, documents the fly fishing adventures of his life with a focus on some of his favorite fly fishing spots in the world. In 1988, Jim was featured in an award winning video (now on DVD), Catching More Steelhead, produced by Scientific Anglers.

Every time an angler fishes specific water, they are trying to accomplish something. If the existing lines that they are using are not working, they need to start cutting, splicing, and chopping them up and making them fit their needs. After that, they will need to experiment with those lines and test them out. These are the first things involved in creating, testing, and manufacturing a fly line or designing a fly.

One of the biggest advances in fly lines is that the industry is coming up with new center cores. These have a bigger value when it comes to warm saltwater fly lines. High performance lines that have minimal false cast are now available. Also, the fly line industry has been making exceptional coatings which are very critical for the line’s finishing touches.

Every rod manufacturer is a little different from the other. Some look for a light soft action, a medium action, a medium fast, or a fast action rod. Some of the really fast action rods don’t feel as good when you’re casting because they are a little stiff. When Jim designs rods, he puts a very strong lower butt section, which is very stiff but has a sensitive tip. This will prevent the rods from collapsing on the angler when they are casting.

There is a significant difference between casting floating line and sinking tip lines: A floating sink tip is cast like a floater – it is the line that one would first start with and it’s a line that one always sees when casting; it will always be surface. In a sink tip line, one does the same stroke but there will be just a minor kick at the end. Basically, a floating line outlasts a sinking line. But according to Jim, one shouldn’t just stay with the floating line, but venture into sink tips and sinking lines. “It will change your world and I believe that you’re going to catch bigger fish consistently.” A floating line is best for stillwaters. They are always a good line whether they are coming up or they are rising. Using an integrate sink tip line helps in a more successful fly fishing. It makes casting and fishing much easier.

For care and maintenance of fly lines, there is a line cleaner that is available in the market. However, mild dishwater soap and lukewarm water can do the trick. Lines can also be wiped down. Using Armor All is not advisable since it will dry and crack the line later on. A special formula isn’t necessary for cleaning lines.

Listen to our full interview with Jim Teeney and know more about choosing the right fly line to use on your fly fishing ventures.

The Teeny Technique for Steelhead and Salmon