Home » Fly Fishing with Terrestrials in the Rockies

Fly Fishing with Terrestrials in the Rockies 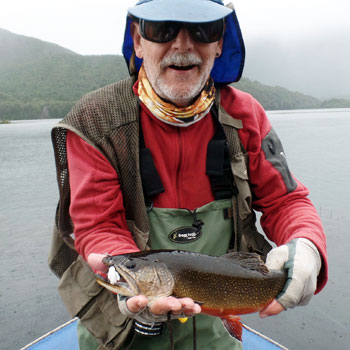 Listen to other shows with Richard Pilatzke…

You’ve probably heard the expression “It’s raining cats and dogs.” Well, for fly fishers they would much rather it be raining ants and beetles. Yes, it’s a terrestrial rain that can turn a placid pond into a fish feeding frenzy. If you’re lucky enough to be caught in that “rain” and you’ve got the right fly with the right cast you could be in for some exciting top water action! Expert fly tier and fly fisher Richard Pilatzke knows all about fly fishing with terrestrials. He’s been doing it for over 30 years and has built a solid reputation with this fly tying demos at sporting shows across the country. If there is one thing that Richard likes best about fly tying it is the creative aspect and that’s something every fly tier should embrace.

If an extraterrestrial is something that is supposed to be “not of this world” then that would make a terrestrial as an animal or bug that spends most of its life on the land. In the realm of fly fishing terrestrials are those critters and insects that live mostly on land, but can end up in the water as a tasty treat for fish. On the list of potential terrestrial flies are ants, beetles, grasshoppers, wasps, hornet and bees. You can even add on mice and frogs to that list. All of those can become imitation flies. Which fly to cast depends on the where and the when of your fishing trip.

For instance, as Richard explains insects like Mormon crickets are common on the Green River in Utah while cicadas work great in Colorado. In fact, terrestrial fly patterns have been around for literally generations. The first published appearance of fly tying was in the 1836 "must-read" The Complete Angler. Richard has his own long history of fishing with terrestrials starting with the very first fly he ever tied. That was a black thread ant he found in Jack Dennis’ fly tying book. For Richard this was a fly match made in heaven as he continues to this day to tie terrestrials.

Of course, just because you’ve been tying terrestrials for most of your fishing career doesn’t mean there still isn’t room to learn and improve. Richard is constantly on the prowl for new patterns and materials. This summer’s terrestrial tying experiment for Richard will involve sinking epoxy ants. When it comes to tying ants you have quite a lot of options between the McMurray Ants which are made of balsa word to foam ants. As for ant legs, most folks like to reach for deer hair, but not Richard. He’s found that deer hair can dry out and become brittle. His solution? Nylon paintbrush bristles. They’re durable and easy to work with. Just goes to show you that great flying materials all are around!

Moving up from ants, Richard has found working with hoppers is a great choice for fly fishing in the Rockies. The first thing Richard does when he gets to a fishing spot is to beat the bushes to see what falls out on the ground. This is the best way to show you in an instant what the nearby fish will be dining on. In many ways color isn’t as important as size with hoppers ranging from 2 ½ to 3 inches and that’s just what you should be imitating with your flies.

Which brings us back to the terrestrial rain. Overnight, the bugs fall in the darkness which is why early morning is such a prime fishing time especially on lakes and still water. Richard sums it up best, “One of the most effective fishing strategies that you can have in the Rocky Mountains and any place that is going to get terrestrial rain which would include the Sierras, the Rockies, the Smokies is to go out at first light and you’ll see fish rising.” In other words, when it starts to “terrestrial rain” leave your umbrella home and commence to casting.