Brian Chan is back for Part II of Fly Fishing Trout Lakes. We had so many questions for his intial show that we had to schedule a special extended edition to get through the questions. If you thought the first show was great wait until you see what we have in store for you in this one. 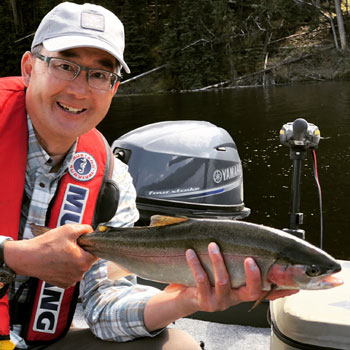 Listen to other shows with Brian Chan…

Brian Chan is back to answer your questions. So listen carefully and learn some of the most important things to help you make your stillwater trout fishing the greatest success ever.

Brian is a professional fisheries biologist who has been an avid Stillwater fly fisher and fly tier for over 35 years. He is also a fly fishing author, video producer, lecturer, and angling guide. His works include the books Morris and Chan on Fly Fishing Trout Lakes, Stillwater Solutions Recipes – 30 Proven Patterns, which he co-authored with Phil Rowley, and the DVD Expert Techniques for Stillwater Fly Fishing. He also contributes to a lot of fly fishing magazines and is a regular guest on several fly fishing shows, as well as a co-host of the The New Fly Fisher Show. Brian has a number of professional fly fishing industry affiliations including Sage, Mustad, Rio, Islander, Superfly, and Outcast Sporting Gear.

Trout feel much safer eating nymphs which are closer or deeper in the water column rather than higher, which exposes them to predators. This is why trout usually go after nymphs. Around 85 to 90% of the calabaetis fly fishing that Brian does in lakes are on nymphs. His favorite patterns include gold bead-headed flashback pheasant tail nymphs, or straight pheasant tail nymphs without a flash back. However, when the emergence gets heavier and the fish start to get more focused on the real nymphs, you should get more selective on the patterns you use, or in terms of shape, size, and coloration of your nymphs.

If you’re approaching a new lake or a lake you that you haven’t been on for a while, leeches and dragonflies are good searching patterns. You should spend a few minutes at the edge of the lake turning over logs and rocks to see what bugs are in the lake, what color the dragonfly nymphs and leeches are, and if whether the lake has scuds in it or not.

Brian’s favorite fly patterns include the Mohair Leech, a black body red copper wire ribbed chironimid pupa, a black micro leech, a half back imitating damselflies and mayflies, and a floating water boatman pattern. His choices are based on the lake being monoculture, which means that there is no forage fish in the lake.

When fishing chironimids, you have to consider a lot of things. First and foremost, there are over 2500 species of chironimids in the North American waters. That’s why you have to consider the lake morphometry or the physical structure of the lake, how much deep water zones it has versus shallow water, the productivity of the water, and the nutrient water chemistry. All these have an impact on the actual species diversity. Chironimids are usually found in the richest, muckiest, muddy bottom structure. Prime chironimid emergence temperatures range from 50 to 63 degrees Fahrenheit.

When you’re fishing trout, you can either go shore fishing or boat fishing. If you’re on a lake where you can stand on the edge of the lake or wade in where you can cast out and reach shoal where the fish are feeding, then you can do shore fishing. However, in the long run, you will need a floating craft to be effective when fishing lakes. You can start with polyurethane or rubber float tube with an inner tube, or you can fish from a pontoon boat, canoe, and then a boat. When you’re fishing small waters, the ideal one to use is a pram, which has a flat-bottom design. This allows you to stand up and look down into the water.

The main advantage of using boats instead of wading on the shoreline is that it gives you the ability to see into the water, allows you to cover any depth of water, move around, and get to the edge of the drop-off that you might not be able to reach from shore.

If you’re fishing in stillwaters, there are three basic lines that you must have: a floating line or a full floater, a type 1 or an intermediate sinking line, and a full sinking line.

When Brian fishes an unfamiliar body of water, he likes to have a cruise around the lake and have a look around. He says that it’s very helpful to have a contour map since it will help you familiarize yourself in the area. The first thing you should look for is where the food is in the lake. In trout lakes, they are usually on the edge of the drop-off under the shallow water or the shoal area. This is where the bugs and other food sources for the trout are located. Usually, these are seven to eight meters in depth.

If there are creeks in the lake, go for the inlets and outlets – they are often a source of attraction for fish not only because of the cool water coming in, but most especially, the flow usually traps insects down and form a feeding lane for trout fish.

When it comes to feeding on actual insect emergences, trout often feed in a very precise depth zone. For example if trout are feeding on mayfly nymphs, they will want to eat them at a very narrow depth zone. It could be between 11 and 13 feet deep or 10 and 12 feet deep. The bottom line is, they only care about how much food they can get with a minimum amount of energy expended to get that food.

Trout don’t swim from one end of a lake to the other end of the lake in search for food. If all their habitat and nutritional requirements are already in one bay of the lake, they don’t necessarily have to go looking since they are already comfortable in that particular area. 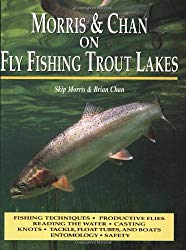