Trapper Badovinac guided professionally on the Missouri River for nine years and authored a book titled ‘Fly Fishing Montana’s Missouri River’. Listen in to learn all you need to know about fly fishing one of America’s great rivers. 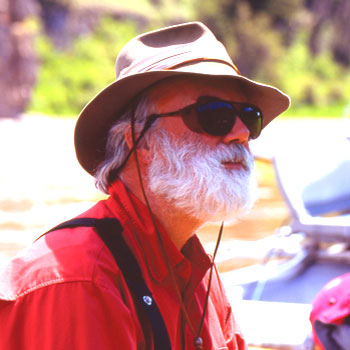 Montana’s Missouri River is every fisherman’s dream. It is known worldwide for its exceptional dry fly fishing. The tranquil surroundings of this mystic river, will definitely be an adventure worth remembering.

Trapper Badovinac, a professional fly fisher has been working as a guide for 11 years; nine of them on the Missouri, Smith and Blackfoot rivers in Montana. He has tied flies commercially for shops in Colorado and Montana and still ties his own flies. Trapper is a writer, photographer, graphic artist, and a lecturer on fly fishing and entomology. His articles have appeared in numerous magazines including Fly Rod & reel, Northwest Fly Fishing, Montana Sporting Journal and Northwest Travel. He has penned two books namely: Fly Fishing Montana’s Missouri River and Fly Fishing the Solitude – Montana. He has won several photography awards including some from the Professional Photographers of America.

The Missouri River is the longest river in the United States – around 300 miles longer than the Mississippi. The headwaters of the Missouri begin near Three Forks, at the confluence of the Madison, Jefferson, and the Gallatin rivers, around 65 miles south of Helena.

The predominant species of trout in the Missouri are rainbows. In the Craig Section, the population of rainbows is around 3500 per mile. You will also find a population of 600 browns per mile. Since the Missouri River trout are just pound-for-pound stronger compared to other fish, the state of Montana quit stocking moving water in 1973. Trout in the river are originally wild trout but they have naturally reproduced now for 30 years.

“They know how to break the tippet, they know how to straighten hooks, the know how to make grown men cry. And they’re very large very strong, very savvy and they’re a challenge. It’s not for the weak of heart. But the rewards are incredible,” says Trapper.

If you want to get into the river, you should take note that you cannot trespass private property to get into it. According to the Montana Stream Access Law, anything below normal high water mark belongs to the public. You can do anything there – fish, take a nap, or eat your lunch. However, you cannot trespass to get there. If you want to have much more of the river to fish, it’s best to float the river and stay below the normal high water mark if you get out of your boat.

Generally, Trapper recommends rods that are bigger than a 4-weight with a lot of backbone for the Missouri River. Any rod with a good backbone that can handle the wind and big, strong fish would do.

Predictable fishing on the Missouri starts about mid-May, but the spawning starts around mid-April until mid-May. The primetime would be July, September, and early October.

In late March and early April, a few Baetis and some big midge clusters will start to emerge. At this time you can do well with streamers and nymphs since the immature insects are still in the river. However, as far as the weather goes, it will still be unreliable. In May, a few caddis flies will show up as water starts to go up. As soon as the water recedes at the end of June to early July, you will start seeing PMDs and Baetis. Tricos start to come out around the third week of July. They will last until the cold season starts.

The general rule of thumb when it comes to nymphing in the Missouri River is to keep the patterns small. There is a term called behavioral drift wherein, for example, you know that there’s a caddis hatch in the evening because there was one for the last 10 nights in a row. Once you took note of this behavior, you can start fishing soft hackles, hare’s ears, and different kinds of caddis pupa in the afternoon.

The kiss of death on the Missouri for nymphers is two things: One is they don’t allow enough leader and tipper between their indication and their top fly. So if you’re fishing in four feet of water, you need to go nine feet between your indicator and your top fly. The other kiss of death is some of the takes are very subtle because the flies are very small. The indicator will hesitate and turn around so you don’t need to wait until you see the fish jump with your leader.