Ralph Cutter literally wrote the book on fish food. To write Fish Food he donned his snorkeling gear and studied species underwater. Listen in to learn what Ralph has discovered about the food trout eat and why - it's sure to make you a better fly fisher. 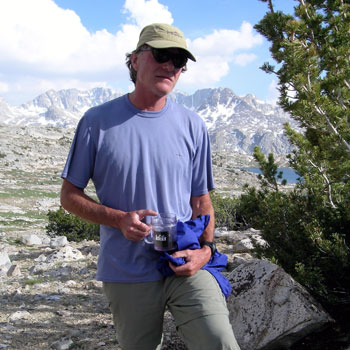 Listen to other shows with Ralph Cutter…

Ralph and Lisa Cutter have run the California School of Flyfishing ror the past 30 years . In pursuit of trout they have logged well over 4,000 miles throughout the High Sierra back country. They have guided and hosted trips in Alaska, Mexico, Belize, and Peru. They recently returned from a scientific expedition in Papua New Guinea where they lived for a month and documented fish species in a never-before explored jungle caldera.

Ralph has written hundreds of articles and contributed to over a dozen books on fly fishing and aquatic ecology. His book Sierra Trout Guide has sold over 70,000 copies and another book, Fish Food is one of Stackpole Book’s best sellers. He is a columnist for California Fly Fisher magazine and past editor of Fly Fishing the West and Adventure West magazines.

Lisa has illustrated a number of fly fishing books, magazines, and scientific journals with her scientifically accurate renderings of aquatic insects.

The Cutters produced and filmed the video Bugs of the Underworld which won numerous international awards and has been the top selling video in its class three years running.

The Ralph and Lisa were instrumental in the discovery of the first new trout species described in the past six decades. It was discovered in the remote Sierra Madre backcountry of Central Mexico, and of course, it was caught on a fly.

The Cutter’s are ardent conservationists and life members of Trout Unlimited. Ralph and Lisa were inducted into the Federation of Fly Fishers Hall of Fame in 2000.

Fish Food: A Fly Fisher's Guide to Bugs and Bait