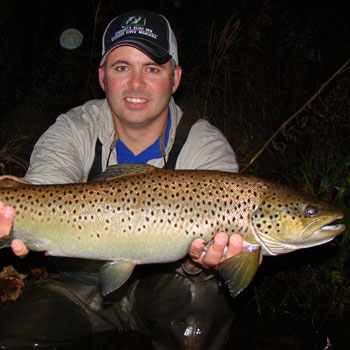 Listen to other shows with Aaron Jasper…

Well, you may want to listen to European nymphing expert Aaron Jasper because he can help you choose the right spot as well as teach you different nymph fishing techniques that you can use to make your fly fishing more productive. Aaron has been fly fishing since the age of seven and fishes an average of 200 to 250 days a year. Over the years, he has experienced fly fishing on some of the great trout streams around the East and West parts of America, learning many techniques along the way. Aaron co-founded Trout Predator Online with his friend Justin Massimo. The website is a fly fishing community that shares information about fly fishing techniques and destinations.

In the interview we did with Aaron on Eurpoean nymphing, he talked about the different European nymphing techniques, what types of water do they apply to, what types of leaders are usually used, and other tips on Euro-Nymphing. These techniques are very helpful to make the fly fishing season very fruitful and fulfilling.

The Polish nymphing and Czech nymphing techniques, according to Aaron, were developed on high-mountain free stone streams where the fish are not spooky. This technique was originally intended for fishing grayling, which some people say, can even be stepped upon because they are so friendly.

Aaron mentioned that strike detection is far better with the European nymphing techniques because you won’t be using split shots, which causes a dead spot in your line. “On heavily riffled water, you will catch everything that’s there when you do these techniques right because the bite detection is super good,” says Aaron. Detecting strikes is essential in fishing because the more strikes you detect, the more fish you’re going to catch.

According to Aaron, European nymphing works better in riffled waters. “When you walk up to the stream and you see fast moving water or lots of current seams, lots of boulders, heavy turbulence, that’s the type of water these techniques work better in,” he says. The depth of the water doesn’t really matter, though. Aaron says that as long as you’re able to put the fish in a certain location, the European techniques will work better than other techniques.

Aaron shared some interesting tips that you can use when you are using the Euro-Nymphing techniques. First of all, he stressed the importance of movement on your flies. He said that fish want to take something that’s moving away from them. “Fish want to chase after mayflies, caddis flies, or stone flies.” So, catch the attention of the fish by putting a little movement on your flies, or moving it away from the fish.

Another thing Aaron pointed out is that fish are all different. They have certain attitudes. He says, “One fish wants a thing dead drifted towards it, one fish wants the fly above its head, and one fish needs it to move away from it.” Because of this, he says that you also have to try your own methods, or other methods that work specifically in each different situation. He also mentioned that when you cast your flies in the water, you don’t want them there for a long time since the longer your flies are in the water, the fish might be able to disseminate if your flies are fake, which takes away you chance of getting strikes. And again, the numbers of strikes you get determine the number of fish that you’re possibly going to catch. 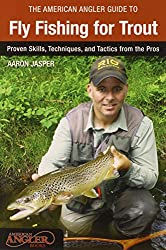 American Angler Guide to Fly Fishing for Trout: Proven Skills, Techniques, And Tactics From The Pros