Home » A Passion for Tarpon

A Passion for Tarpon

★ ★ ★ ★ ★
Andy Mill has a passion for tarpon and has 11 tarpon tournament wins to show for it. If you want to learn how to hook up and land trophy tarpon you need to listen to this show. 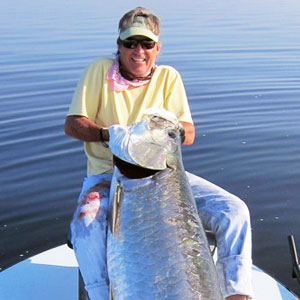 Tarpon with their enormous size and towering jumps, are probably one of the most challenging fish to catch. But with passion, skills, and determination, your most awaited 100-pound tarpon will soon come by and strike at your fly.

Andy Mills has caught hundreds of tarpon during his fly fishing life. In fact, he has won 11 tarpon tournaments, the most ever for one fly fisherman. He wrote the book A Passion for Tarpon where he shares his experiences on catching this challenging fish.

Andy Mill is a skier and a fly fisher. He was a member of the U.S. Ski Team and has competed in two Olympics and two World Championships. He was inducted into the Colorado Ski and Snowboard Hall of Fame in 1994. Andy is also an avid fly fisher with a passion for tarpon. In fact, he has won 11 tarpon tournaments, the most ever for one fly fisher. He was also the one angler to win a bonefish, permit, and tarpon. He wrote, hosted and produced Sportsman’s Journal which included 81 saltwater fly fishing shows. Andy has served on the Boards of the Aspen Educational Foundation, the US Olympic Educational Ski Foundation for the US Ski Team, Aspen Winterclub Foundation and National Atlantic Salmon Fishing Federation.

The tarpon is a large prehistoric fish that eats chicken feathers. As most freshwater anglers are familiar with, it swims in shallow water looking like logs so they are great for sight fishing.

What’s special about tarpon fishing is not only the hunting and visual aspect. Once you throw a fly at a tarpon, you’re communicating with the fish. "When you see what the fish does when he sees your fly, then you make your next move and you’re actually communicating with that fish. And the end result hopefully is having that fish bite your fly."

"The common thing about skiing and fly fishing is breaking the sport down and being able to put a number of pieces to the puzzle together. The more pieces that you have in your repertoire, the better you are going to be."

Since Andy became a skier at a young age, he admits that he is more refined, more focused, and more professional as a tarpon fisherman than as a skier. With the success, focus, and level of professionalism that he and his teammates brought to the table, he felt that they really changed the sport over the last 29 years. For tarpon fishing newbies, Andy’s advice is to get a good guide and “not reinvent the wheel.” The knowledge that guides bring to the table through the price of their fee will save you years upon years of aggravation and frustration, and not to mention, money.

One of the best ways to learn how to fish tarpon is to start practicing with a baby tarpon since they are still agreeable. Baby tarpon bite the fly every time they see it making it very easy to catch them. While they are still at this stage, you will be able to learn how to control your fly line as well as learn how to present the fly a little bit better. If you start training with bigger fish, the learning curving won’t be as steep, though it will be more rewarding in the long run. If you want to fish for babies, the months of July and August are perfect. You can move on to the big tarpon on April and May.

To be able to catch a tarpon quickly, you have to know how much pressure you are applying to the hook or to the fish. You need to learn how to apply 12 to 14 pounds on the fish. Once you do this, the fish will belly up in 10 to 15 minutes maximum. When you do this procedure, you will also need somebody to attach the butt section of your fly to a scale and call out the numbers that are representing the weigh of resistance. A straighter rod will also help you catch the fish faster because the pressure will go to the butt of the rod, which is the beefiest part to fight the fish.

Your flies do not necessarily have to be perfect imitations of crabs, shrimp, and baitfish for you to catch a tarpon. If the fly lands at the right spot and you shake and tweak it, even though the fish may not be hungry, it will bite the fly just to get it out of its face. The presentation also matters more than the color of your fly. Getting the tarpon to bite depends on how you entice the fish to your fly.

Most people focus on what is the fly, however, the most important thing is not only on the fly. "Focus on where you put that fly, how you intercept that fish, and how you feed that fish." One thing to remember is getting a fly that is not going to be offensive to the fish. "You can’t be throwing 5-O hooks anymore," says Andy.